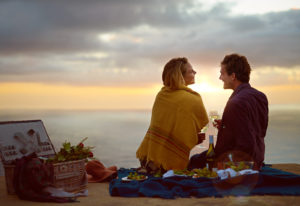 Enjoy a romantic picnic at sunset.

Here is a brief description of each area to familiarize yourself and understand why so many Manitobans choose to enjoy this area for recreation and retirement.

The pristine, secluded, and stunningly beautiful beaches of Patricia and Beaconia are located at the south end of Lake Winnipeg.   For families seeking nothing more than sun and sand, windsurfers seeking elbow room, and nature lovers seeking a tranquil refuge, the beaches offer a peaceful alternative to the Grand Beach bustle.

The Beach is situated on a sandy peninsula that extends into Lake Winnipeg, while Beaconia lines a sandy island, joined to the mainland by a causeway. Sitting side by side, the beaches are separated by a channel which joins a marshy lagoon to the Lake.

The Beach is still in a near-natural condition, and this is considered a bonus by regular visitors and newcomers alike. It’s an excellent family recreational beach, and a favorite spot for windsurfing and having a picnic.

Beaconia was originally named after a beacon that was set up here in the late 19th century. It was a Station House for the Canadian National Railway on the shore of Lake Winnipeg in the first decades of the 20th century.

There is now a plaque that commemorates the founding of the village over a hundred years ago, giving the visitor a sense of the  history.

It is a beautiful and pristine 3 kilometre wide sandy beach located 45 minutes north of Winnipeg off Highway 59.

Beaconia Beach is completely secluded, with no man-made structures at all. Beaconia has a very quiet and secluded beach.

Lakeshore Heights is a cottage development between Beaconia and Grand Beach a short one hour drive north of Winnipeg. It has about 300 cottages and approximately 25 permanent residences

There are children’s playgrounds, volleyball court, a basketball court, a covered community centre with barbecues and picnic tables.

The community of Balsam Bay lies just south of Grand Beach. The recorded history of the community reaches back to 1884.   Balsam Bay is currently home to eight cottage subdivisions and is growing rapidly.

The resort town of Grand Marais is a popular destination for cottagers and tourists visiting the Grand Beach area. The community is home to many small businesses that cater to tourists including the Sand Bar Hotel and Potenza’s Pizza.  Situated immediately south of Grand Beach Provincial Park, it is less than an hour’s drive from Winnipeg, located in the heart of Lake Winnipeg cottage country.

Grand Beach is 50 minutes north of Winnipeg and is a favourite Manitoba holiday destination for campers, cottagers and visitors.

As Manitoba’s beach paradise on the prairies, Grand Beach is consistently ranked as one of the top ten beaches in North America.
Take a hike along the Wild Wings Trail of this Provincial Park’s Grand Beach Marsh, or stroll the bustling Boardwalk of the beach itself.

The Canadian Northern Railway built its line and set up the resort along the ‘Grand‘ beach. The board walk that extends along the beach was built in the early 1930s  and is still great for an afternoon walk along the beach.

Just south of Belair you will find Lester Beach. Famous for its beautiful white sandy shoreline, Lester’s topography boasts of rolling hills with plenty of pine and birch trees. It’s an ideal place for children with its shallow shores.

Belair beach goers enjoy a grand view across Lake Winnipeg. Located just south of Traverse Bay corner, Belair is situated on the western end of Belair Provincial Forest.  There are several Belair subdivisions with cottages. Most of the coast line is rugged, with several of the properties along the lake enjoying elevation. This height gives Belair lakefront owners a magnificent view across Lake Winnipeg.  On a clear day you can see all the way to Gimli.

Traverse Bay, is located on the mouth of the Winnipeg River where it flows into the lake between Elk Island and Devil’s Island.  The area includes Traverse Bay Corner where Hwy 59 and Hwy 11 intersect (formerly known as Nelly’s Corner). There you will find Lakehouse Gift Shop a laundromat, post office, liquour mart and grocery store, automotive repair and Hillside Lumber yard.

Hillside Beach is the best of all worlds. Its long sandy beach is usually quite empty and is perfect for a walk.  The lagoon is great for fishing, boating or  waterskiing.

Hillside Eatery is one of the best restaurants in the area (try the pizza!) and also offers groceries and DOMO gas. Only 15 mins away from Grand Beach Provincial Park and 5 minutes from Grand Pines Golf Course and the Birchwood Hotel, it is close to everything.  This is where people come to live, laugh and enjoy the best of the eastern beaches.   Hillside Heights enjoys the highest elevation in the area, with many lots enjoying a view of Lake Winnipeg.

Albert Beach at the mouth of the Winnipeg River has a strong French influence. In the 1920s, the Saffie family, originally from Lebanon, came to this area to take up a homestead and set up a business. Saffie’s store is a hub of activity with Le Gouter restaurant right across the street.

Albert Beach has a nice sandy beach – ideal for swimming, sailing and kite-surfing.

Historically this was the place voyageurs chose to portage from the Winnipeg River to Lake Winnipeg to avoid having to navigate all the way around Île-à-la-Biche and Elk Island.

The Rural Municipality (R.M.) of Victoria Beach is a so called “resort municipality” located on the south-eastern shores of Lake Winnipeg approximately 100 kilometres north of Winnipeg. Some of the finest beaches in Manitoba are located here.

Victoria Beach has a growing permanent population approaching 300 residents, but during the summer vacation season the population swells to about 10,000 people. The Social Scene is one of the most active in Canada.  The new Sports Centre is the site of curling, lounge, yoga, pickle ball, and a weekly farmer’s market in the summer. The community is unique in that there are no cars allowed during the summer months – creating a relaxed, private, enjoyable atmosphere, safe for children. The Victoria Beach Club is completely volunteer driven and provides programming for the residents including tennis, yoga, dances, sports tournaments, and a variety of activities for children.

Page load link
Thanks for your interest in Hillside Heights!

Want more great updates, special offers, current photos and latest news about our Hillside Heights development?
Drop us your email and we will be sure to keep you informed of our offers, events and updates.